Thank you to Michael Graupmann for this wonderful story – right before the Driskill Halloween events…published on www.austinculturemap.com, also see an article in the Georgetown View below.

Dinner with the Dead 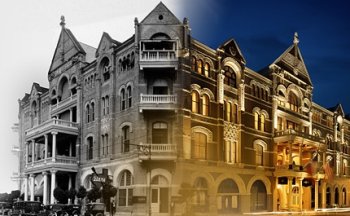 The Driskill Hotel is one of Austin’s most famous haunted hotspots. That makes it the perfect location for this month’s Traveling Psychic Supper Club destination.

In the most exciting scene of the 1988 haunted comedy classicBeetlejuice, some restless ghosts orchestrate a major disruption of a dinner party in the house they share with the living.

And while they can’t promise the same kind of choreographed fun with the undead, Austin’s very own Traveling Psychic Supper Club does guarantee a thrilling night of food and connection — with the living and beyond.

Started earlier this year by psychically sensitive Leander resident Deborah Antich, the TPSC is now a regular meeting of like-minded Central Texans who wish to share the recent information they’ve gathered from the spiritual world.

Up to this point, the TPSC has consisted primarily of Antich’s personal clients and network of fellow mediums. But this month, the group is headed to the Driskill Hotel, and is expanding the invitation to anyone interested in learning more about Austin’s most notoriously haunted institution.

On Oct. 20 and 27, the TPSC will be taken on a tour of the Driskill’s ghostly hotspots, followed by a dinner reservation at the award-winning 1886 Cafe & Bakery.

CultureMap got a chance to talk with Antich about the growing success of the TPSC and the excitement behind the upcoming Halloween ventures to the Driskill, which are sure to scare up some sightings.

CultureMap: Hi, Deborah! Thank you so much for talking with us. As a medium, you must be busy in October. Tell us a little bit about what you do professionally.

Deborah Antich: I work as a Clairvoyant Medium; but I’m a little different from the Long Island Medium. She channels the dead, I channel information. It may come from someone passed over, but not always. I tell people what they need to hear. So, yes, I do see clients in that respect: psychic personal development, readings and the like.

Interestingly enough I’m moving into clairvoyant business development and relationship development. My main passion is working with kids, and I wrote and developed a confidence building and instincts training programthat I facilitate throughout the area. I’m a teacher of sorts, but I’m always learning.

CM: How did the Traveling Psychic Supper Club come in to existence?

DA: I started the group because I really wanted some of my clients to meet each other. I felt they had so much to share, and that we could all learn from each other. Interestingly, sometimes when I read, the information I receive for one client is also meant for another that I will read two weeks later. I began to see that connection and was fascinated by it.

I thought, “If these people are connected by information, why shouldn’t they meet each other?” So I invited a few clients, local readers of my original blog and some “psychically open-minded” friends together for dinner.

CM: Does everyone understand and get into the concept right away?

DA: Funny, the conversation usually bounces around and everyone contributes. I was worried that with getting all of these people together that didn’t know each other, no one would talk. But actually, I can’t shut them up! Everyone is ready and willing to interject at any given time. It’s lively and “spirited” — pardon the pun — and every dinner is better than the last. We all leave feeling energized and accepted.

CM: Are there similar organizations like this throughout the country?

DA: As far as I know, we are the only group specifically like this, a traveling psychic supper club. But I would love to have chapters everywhere. That would be great!

CM: Are all of the current members psychics or psychic minded?

DA: Oh yes, definitely. But only because everyone is psychic to a degree. Some people just disregard it or don’t accept it. Actually anyone who is open to the idea is welcome to join us. If someone is interested or intrigued, I would love to have them join us.

CM: How does one affirm their psychic sensitivity to gain membership?

DA: You show up! We are an open group, so whomever shows up to any given meeting is exactly perfect. I do like to keep the meetings small, though. The one at the Driskill is the biggest one yet, with two reservations of 13 each day. I do that so everyone has a chance to connect in one conversation. I want everyone to have the opportunity. I really do see this as part of my life’s work and openly invite everyone. If I have enough interest, I’ll have five dinners a month if I have to!

CM: We know the Driskill has a history of haunting. Are your usual supper spots also haunted or is this a unique location for you?

DA: Nope, none of them have been (that I’ve felt). I just choose a variety of different types of foods in different parts of town, since our members are all over. The Driskill is truly unique in the sense that it is legendary and openly haunted.

CM: Have you personally experienced any of the famous Driskill spirits?

DA: I’ve only been to the Driskill one time — the day I made the dinner reservation. I didn’t experience anything then, but I wasn’t there very long. Honestly, I am going in crazy excited, but with no expectations. That’s how I like to do most things; I think expectations ruin experiences to some degree. I just want to let whatever is going to happen happen.

CM: Are you expecting the chances to be greater on this tour since so many sensitives will be gathered in one location?

DA: I ABSOLUTELY expect the chances to be greater. I know the abilities of the people gathered and I am excited to see what happens. I don’t think I’ll be disappointed. Actually, since we began meeting I’ve experienced a strengthening and fine-tuning in my own abilities and have had similar feedback from others in the TPSC. So who knows what will happen at the Driskill?

CM: Is there a reason you’re holding this event closer to Halloween? Is this a more psychically “charged” time of year?

DA: Halloween is my absolute favorite holiday, and fall is such a transitional time. I’ve always seen having a dinner at the Driskill as being a pinnacle I would like to reach with the group. Something just said to me:  “Halloween.” So why wait for the pinnacle? Why not now? For us, everyday is like Halloween, with Spirit and spirits around, being clairvoyant. So I see going to the Driskill is kind of like going home.

Reservations are still being accepted for the Traveling Psychic Supper Club‘s Oct. 20 & 27 meetings at the Driskill Hotel. Both sessions begin with the tour at 4 p.m., followed by dinner reservations at the 1886 Cafe & Bakery at 7 p.m. Tickets are $35.00 and do not include the cost of dinner.

A place for people with “open” minds

Deborah Antich is what one might call a “clairaudient”—she has the ability to receive extrasensory information from behind her right ear, she explains.

“It’s kind of like tuning a radio and picking up on other people’s information,” she says, describing the sensation as a delicate balancing act between information being sent by people nearby and picked up by the clairaudient receiver. “I’m not reading minds,” Deborah says. “I’m picking up on frequencies.”

Though Deborah feels blessed to consider herself clairaudient, at times she has struggled to manage and hone her ability. In 2012, in fact, she was having trouble going out in public because she was constantly picking up on multiple people’s thoughts and conversations at once.

“At times it was difficult to concentrate on my own thoughts,” Deborah says. “I had so much information crammed into my head and was seeing patterns in information I was picking up on from people who didn’t know each other. . . . I’d have to get a pen and paper to get some of it out of my head.”

That’s when Deborah came up with the idea for the Traveling Psychic Supper Club, a monthly dinner intended to help people who want to better understand their psychic, or extrasensory, abilities to make connections with people and ask and give advice.

The group began with a few people who saw it advertised on Craigslist, and it grew to a monthly turnout of eight to twelve. Each person comes with different psychic experiences, backgrounds, and skills, which makes for a lively and engaging dinner.

“Dinners fill up fast,” Deborah says, “but I want to keep them small so everyone has the opportunity to connect and learn about themselves when they attend.”

Typically hosted at trendy restaurants around the greater Austin area, the club gives attendees an opportunity to laugh, cry, ask questions, and give advice. Over gourmet salads and drinks at Austin eatery Epicerie, participants’ voices overlap in motley blanket of simultaneous conversations.

“We have someone in the group who can talk with dead people,” Deborah says. “There’s nothing scary about it. It is what it is. It’s like saying, ‘He has green eyes.’ It’s just there. . . .  Another woman does tarot, and we have another woman who uses [a] pendulum, and [we have] an astrologist.”

Since Deborah started the Traveling Psychic Supper Club in June 2012, it has grown more than she imagined it would. She recently launched her own Thursday-evening radio show under the same name and is in talks with a television network to create a reality show about the group.

“Now, [TPSC] is something that I can try to steer but can’t control,” she says of the group’s rapid growth. “It’s an exciting journey.”

One thought on “Press”