Psychic TV – behind the scenes…April’s dinner at Moonshine

It’s been a while since this all happened, it feels like years actually, and I still feel like I’m catching up!  TPSC spent a week in April shooting a ton of footage that is being used to pitch a show  about the group.  We spent hours working with our New York crew – David, Andrew, Alexis and Josh filming, brainstorming, planning, sharing experiences and of course, eating!  We capped off the week shooting a private dinner at MOONSHINE in April.  Moonshine has its own story, as we found out – the room we shot in (the Sunday House) pictured below

had a couple of additional inhabitants hanging out all night in the storage space upstairs…peeping down occasionally to see what all was going on…We were sitting at a round table directly underneath the opening to the second floor, (which used to be a kitchen) above us.  Through out the dinner my attention kept getting pulled up in a couple of specific places, where there would be something like a movement, but when I looked up, I would see nothing.  But I could feel something was there.  At one point Kirby asked me, “Why do you keep looking up?”  when I told him why, but that I didn’t see anything, just kept having my attention lifted, he said, “yea, there’s two guys up there.” and pointed up at the area right above me and Kelly.  So Kirby could see what I couldn’t see, but could feel.  the place definitely had an energy all its own.  Here are some pics – although not very good, of the open upper space.

(the crew used that open area to light the room with the film lights – one note about that – there were lights all over the room, otherwise it would have looked like a cave!  the lights that were actually in the room were tiny and put off very little light – so we had all of these extra lights in the space as well – in all of the corners in addition to all the ones up above.  But it was crazy – those lights should have made that tiny space hot, but it stayed cool all evening.  in fact, it was actually cold and the waitress kept coming in and turning the AC off, we didn’t need it at all.  The space was downright chilly – which the waitress noted isn’t normal.   At one point she came back in after hearing us talk about the “guys” upstairs and chimed in – that the staff said the “ghosts live upstairs” in the Sunday House.  We definitely felt their presence all night…

Here are some other pics – some behind the scenes stuff, which is my favorite.  I wanted to get a lot more of actual filming, but they kind of look down on you grabbing your camera and taking pics during taping.  So this is what I’ve got to share from the week…

Susan and I went to get our hair cut – and she gave her       hairdresser Ludin a reading.  Quite by surprise, he in turn asked if he could give her one too!  He did a great job, showing exactly what we always say

– everyone has psychic skills –

you just have to trust your own insight.

Susan and David (our Director) at Kawa above

and Alexis our  main Camera Guy at Susan’s – right

Filming at Lacey’s – Below with Kelly, Lacey, Susan, Deb 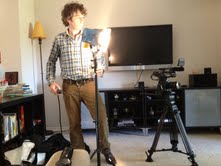 Alexis setting up for an interview – my house

So much work goes into what these guys do!

Andrew putting a mic on me at Kawa

with Josh and Alexis.  Most of us

wore mics for the filming.  The trick

was remembering to give them back

at the end of the day – for me at least.

Lacey and Sally at Moonshine. 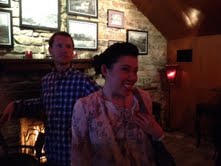 Kirby finally made it into a picture – the 5 main members and the guys at Moonshine, after dinner 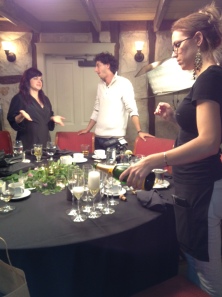 All the footage (and these pics only show a fraction of it) is currently being edited and we are looking forward to spending the summer here in Austin, with our local friends before finding out what comes next.  Thank you to everyone who has supported this little idea about a Supper Club for Psychics, become a part of us and participated in the growth of the group.  We’ll keep you updated.  But for now, join us in May at Epicerie, for what we consider a “normal” dinner – which of course as we all know…is anything but…